Suaoki’s portable generator crams 220 watts of power into a durable and rugged carrying case, making it one of the better choices for outdoor use.

Advantages of the Suaoki Portable Generator

This generator gives you a leg up in several ways, whether you’re on the trail, boat, or simply in your backyard.

Most portable generators this size have a wattage anywhere from 100 watts to 150 watts. Suaoki’s tops out at 220 watts, which allows you to power a few more small devices at the same time, or some that require a little more power than a laptop or phone, such as bright lamps and fans. 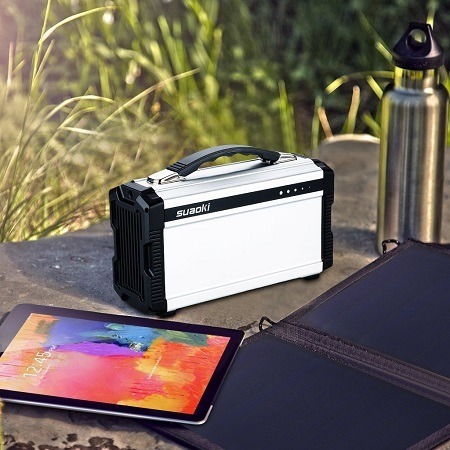 This can come in very handy during longer camping trips and or outdoor functions where you’d like to be able to do more than just recharge your phone.

Part of the reason this unit is so light is because of its lithium battery, which gives it an extremely long life span. The battery has an mAh capacity of 20,000, allowing it to power your devices much longer than other generators.

Suaoki decided to go the flat route when designing the shape of this generator. The unit can be laid down on its front or back during use, allowing you to tuck it out of the way to save space.

Everything is contained inside a solid, lightweight aluminum alloy shell that resists small falls and impacts, which makes it perfect for most outdoor situations. 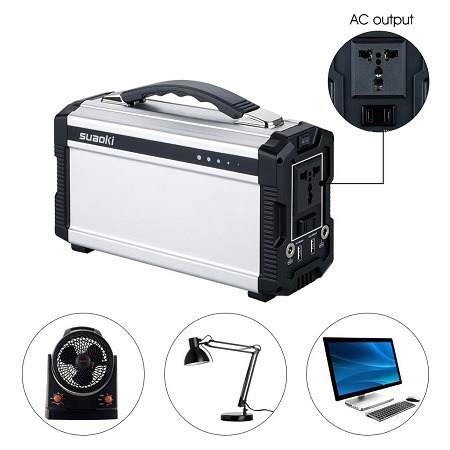 The unit itself weighs 5.5 lbs and measures a very small 9.8 x 3.4 x 6.4 inches, so it’s not going to be a hindrance when packing it with other items for your activities. Carrying it back and forth to where you are going won’t be a concern either.

All of the ports are located on the far end of the unit, which include two 2A ports, two USB ports, one two-prong AC port, and one three-prong AC port. Although the generator’s goal and function is to be charged from solar panels, an AC adapter is included for faster charging when at home.

Limitations of the Suaoki Portable Generator

This generator has plenty of features, but there could be some improvements.

It’s fairly common to see solar panels lumped in with smaller outdoor generators such as this one. Doing so would be far more convenient. 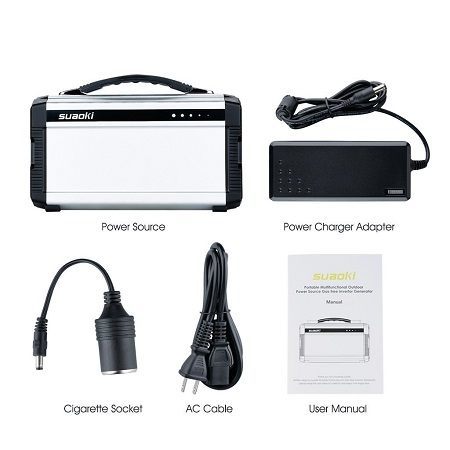 If you’re going to make a generator this durable for outdoor use, a slipcover makes a lot of sense. This would allow the generator to charge when near water or when raining, as well as protecting it while on a boat.

Despite some small issues that have nothing to do with the unit’s performance, the Suaoki Portable Generator remains an excellent choice for those who are looking not only for some extra power in a generator, but an extra measure of durability as well.